England have managed to secure another home series win, but is the defeat of India enough to suggest that the future of this side is a bright one? Batting collapses remain a consistent theme and the bowling, at least at home, remains potent. Do Ed Smith and co. have a clear plan for this team? 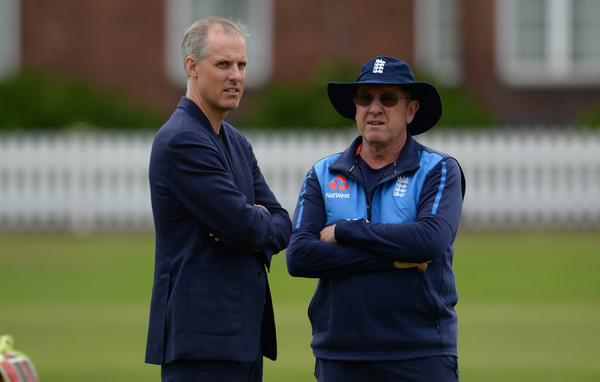 Ed Smith, left, and Trevor Bayliss appear to have no clear plans for the direction of England’s Test team

Alastair Cook has solved one of the problems at the top of the order by announcing his imminent retirement. His contributions, where they were once game shaping, have become far less frequent and far less impactful. The vultures were circling and the statistics, where they were once so compelling, have become insipid and uninspiring. He has been clung to by England with a longing glance to the past; he was brilliant, surely he can be again? It was akin to claiming that an 88-year old Sean Connery could still do a decent job as James Bond.

The trouble is, England have nothing to replace Cook with. Rory Burns, the Surrey captain who has been in fine form in 2018, has long been touted as a replacement for Cook’s opening partner, Keaton Jennings. He will now have to replace Cook and Jennings will surely be afforded a stay of execution. Cook, of late, has been a consistent underperformer in England’s top order and the opportunity to bed in a new opening partnership should be welcomed by England.

Then there is the number three slot. Smith had pushed the captain, Joe Root into the position, but he is a reluctant three and his contributions have been mute. In moving to three, another problem was created at four. England’s batting order has been like trying to plug multiple holes with one sticking plaster.

Dawid Malan, Ollie Pope, Jonny Bairstow and, latterly, Root, have batted at four this summer. Pope has never batted higher than five for Surrey and had never arrived at the crease before the 23rd over in his First Class career before playing for England. Two Tests later, he was axed.

Bairstow, too, isn’t a natural fit up the order and has sunk rather than swum away from the batsman-keeper role at seven which he had made his own. Now he finds himself stranded up the order, without the gloves, and facing an uncertain future in the side. With Moeen Ali moving to three – another gamble by a flustered selection panel – Bairstow may find some sanctuary at five. England need him to.

Ben Stokes is an obvious fit at six, with his duel talents with bat and ball, but his re-selection after a court case in Bristol came at the expense of Sam Curran, the Surrey all-rounder who has rescued this impotent batting line-up on multiple occasions during the series with India. 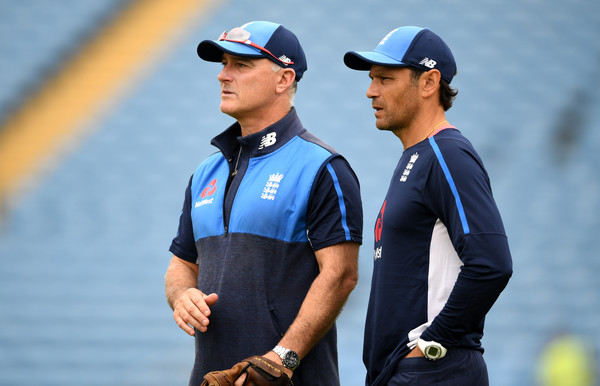 Adil Rashid, controversially recalled having turned his back on First Class cricket, has been something of a passenger this summer. He hasn’t done anything wrong, nor has he really done anything right. Ali comprehensively out-bowled him at the Ageas Bowl and he has, in truth, been wasting a space in the side which could have been used to fortify the batting. Still, Smith will doubtless back his gamble into the winter tour of Sri Lanka.

It is clear that there is no plan for this side, with players in and out and up and down the order. Smith doesn’t know who to pick, as evidenced by recalls for players who have repeatedly shown that they’re not up to Test level combined with call-ups for teenagers, and the players don’t know where they will be playing from one innings to the next. The batsmen, wherever they are batting, simply stride out and repeat the same errors time and again, confirming Einstein’s definition of an insanity; repeating the same process but expecting a different result.

What role, too, are the coaches playing in this? The batting coach, Mark Ramprakash, appears to have moulded the players in his image; talented yet flawed. Like him, none looks set to reach their potential.

Graham Thorpe, too, has been with the side a while now and has had little visible effect. Trevor Bayliss, the head coach, has performed near miracles with the ODI side but appears only capable of coaching the players the same way in the Test arena. There certainly hasn’t been any improvement in this side on his watch.

A clear plan needs to be implemented. I would suggest that Smith goes back to basics and simply picks the best player for each position. Pope was never the best number four in the country, for example, because he had never batted there. Such confused thinking leads to such confused performances.

The youngsters are on the merry-go-round but the consistent underperformers are not. Some tough decisions need to be made and a clear plan outlined.

The trouble is that Smith, much like the England coaching staff, have absolutely no idea how to formulate one. I await the wildcard selections for this winter with interest.

Until then, England will point optimistically at a series win against the number one ranked team in the world. In reality, this is their first series win in their last four and the same problems keep on rearing their heads. What is being done to address them remains unknown.

3 comments on “What is England’s plan for the Test XI?”