The World T20 is fast rumbling towards its conclusion and the wheat has been sorted from the chaff. We predicted that England and India would advance to this stage, along with South Africa and Australia… 50% isn’t too bad, right?! On that basis, we should get at least one of our semi-final predictions bang on. 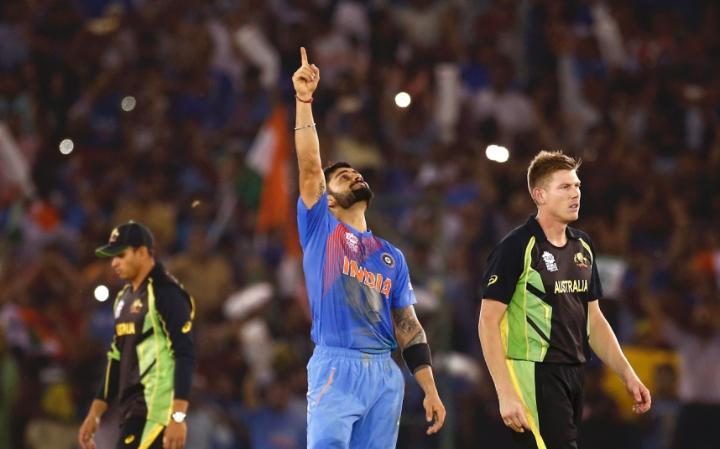 Virat Kohli is pointing India firmly in the right direction

New Zealand have surprised everyone in being the only unbeaten team at the tournament. Their spin trio of Mitchell Santner, Ish Sodhi and Nathan McCullum has asphyxiated everyone, including hosts India in their first game. They left India and Australia to duke it out for second place in the group and India, by the skin of their teeth, have prevailed. Virat Kohli’s exceptional innings against Australia deserved to carry them this far and much rests on his shoulders against West Indies.

West Indies, much like New Zealand, made simple the task of progression, winning all of their ‘live’ fixtures before inexplicably succumbing to Afghanistan. England, much like India, did things the hard way, getting hammered by West Indies first up and progressing via a combination of narrow wins against South Africa, Afghanistan and Sri Lanka and relying upon West Indies to beat South Africa.

The Wankhede has already provided this World T20 with more than its fair share of excitement. The three games here have returned 1,205 runs; an average of 402 runs per game. It has also suited the chasing team. West Indies batted second in defeating England, then England batted second in defeating South Africa in the game of this, or any other, World T20. Only Afghanistan failed to chase down South Africa’s total, only after they had been blitzed by AB de Villiers. You may have heard, but de Villiers is rather a good batsman.

West Indies have the advantage of having played here already, but India can be assured of partisan home support. And in Kohli, they have a man who appears to be going through the gears as the tournament progresses. A lot will rest on West Indies removing him early, as he is the key to this game, as Pakistan and Australia will attest, having been rendered spectators by Kohli masterclasses in the Super 10 stage.

Andre Fletcher and Chris Gayle have been the star turns for West Indies and Gayle’s fitness has been a concern. It is hard to envisage him not playing here, as he is worth the risk: a half-fit Gayle still represents West Indies best option atop the order. Suliemann Benn and Samuel Badree have been West Indies most efficient bowlers. Benn has been economical in the absence of penetration; Badree has been in the wickets. They have been backed up by the seam options of Dwayne Bravo, Andre Russell and Carlos Brathwaite. Darren Sammy, despite playing every game so far, has only sent down two overs. This means that India will have a good idea of what they will be up against.

Kohli, as mentioned, has pretty much carried India this far with 184 runs. MS Dhoni (74 runs) and Yuvraj Singh (52 runs) are the only other Indians past 50 runs in the tournament. The importance of Kohli cannot be overstated and India will be hoping that one of Rohit Sharma and Shikhar Dhawan finally deliver in the early overs.

With the ball, India’s attack has been economical, with only Hardik Pandya going for more than 7.20 runs per over. Ravichandran Ashwin and Ravindra Jadeja have been spearheads of the attack and Jasprit Bumrah has continued his improvement as an international cricketer through this tournament in tandem with the experienced Ashish Nehra. You would back this attack to blunt the threat of the West Indies explosive batting unit, then with Kohli in the form of his life, it is hard to see a way past for West Indies. It will almost certainly be dependent upon Chris Gayle pyrotechnics.

If you fancy Gayle to fire then you back West Indies to win with some confidence. I feel, however, that Kohli is the more dependable (and injury free), and his batting combined with India’s tight bowling will be more than enough to pave the way to Eden Gardens on Sunday for the final.

Delhi, in contrast to Mumbai, has provided fewer fireworks in the way of run scoring. Its three games to date have provided 843 runs, an average of 281 per game. England have played there two most recent fixtures of the World T20 here, defeating Afghanistan by 15 runs and Sri Lanka by 10. The other fixture was a dead rubber between South Africa and Sri Lanka, which South Africa won by eight wickets. England successfully defended in their wins, whereas South Africa successfully chased.

New Zealand have batted first in every game and defended their work successfully. England seem to prefer the chase, despite the above facts, so it may be fairly easy to predict the order of play. That said, England’s defensive work with the ball has been nearly as impressive as New Zealand’s.

England have found runs throughout their batting line up, with Joe Root, Jos Buttler and Jason Roy all having surpassed the 100 run mark. There has also been lower order bashing from Moeen Ali and David Willey to see of the threat of Afghanistan. Alex Hales, who missed that game through injury, has struggled so far and looked all at sea in his brief encounter against Rengana Herath against Sri Lanka. New Zealand will target this frailty immediately with Santner.

Roy, much like Gayle, will score big or score nothing. Unlike Gayle, England aren’t dependent upon Roy. Root is undoubtedly their best player and played a marvellous hand in England’s successful pursuit of 230 against South Africa. There is a case for discarding Hales and promoting Root, but it would appear that England’s XI is set, especially as they have the advantage of having had a good look at the pitch and conditions in Delhi. Buttler is another match winner in the England ranks and highlights the depth of England’s batting.

England’s troubles have mostly been with the ball. Only Liam Plunkett has an economy rate below 8.13 – compare and contrast that to India’s bowlers above. Chris Jordan and Ben Stokes, however, produced their very best under the most extreme pressure against Sri Lanka to get England here, however. This side has not been reliant upon one or two performers. 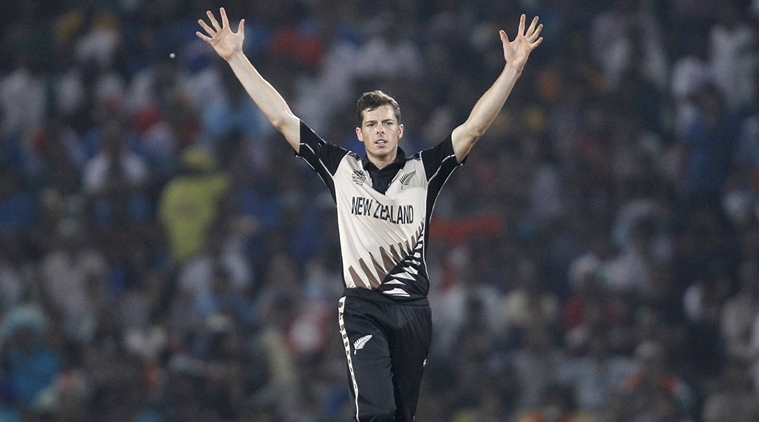 The spin, options, however, are a cause for concern. India, New Zealand and West Indies have made it this far on the back of world class spin performances; England buck this trend. Between them, Adil Rashid and Ali have conceded 225 runs from 23 overs. That’s a combined economy rate of 9.78. If England are going to do this, it will be through their seam options.

New Zealand have shunned Tim Southee and Trent Boult, pragmatically opting for Santner, Sodhi and McCullum, although the later will surely miss out here. McCullum has only played two of New Zealand’s four games and all the indicators suggest Delhi isn’t a surface for three spinners if you have the seam options that New Zealand have. Mitchell Mclenaghan has been New Zealand’s least economical bowler with a rate of 7.87. It is clear that New Zealand’s strength has been their bowling.

To compare and contract Santner and Sodhi to Ali and Rashid: New Zealands spinners have conceded 164 runs from 30.4 overs, at an economy rate of 5.39.

With the bat, Martin Guptil has been New Zealand’s most explosive presence, ably supported by Ross Taylor and Kane Williamson. Again, this side isn’t overly reliant upon one or two key performers.

This should be a fascinating contest, both sides having won through close encounters to make it this far. Having come this far through this article, I’m reticent to make a prediction on this one, but that was the whole reason for opening a new Word document. England have had a good look at Delhi and should be better prepared for what is front of them here. New Zealand have won through on a diet heavy on spin, but the indicators are that it might not be so prevalent on this pitch. On the basis of experience, I’ll go for England to reach the final, where they’ll play India. Just…