Nearly a year ago to the day, Australia held up the World Cup in triumph after a dominant display against New Zealand. Many pundits dubbed Aaron Finch and David Warner as the most explosive opening duo in world cricket. Fast forward to Australia’s first pool match of the World T20 against New Zealand, and Finch isn’t selected and Warner is batting at four. 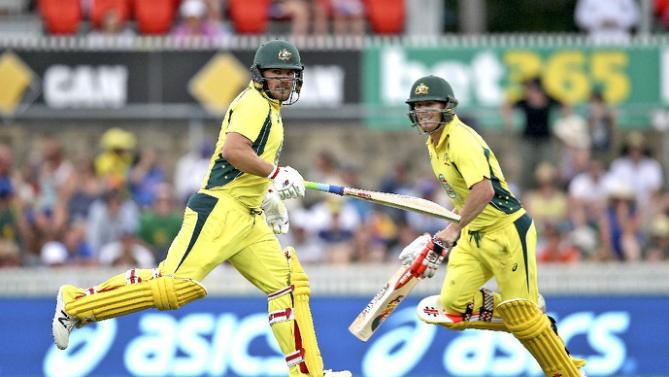 Aaron Finch, left, and David Warner were viewed as the best limited overs opening partnership in world cricket 12 months ago, yet their partnership was inexplicably disbanded for the World T20 by Australia

To the naked eye, it was a Virat Kohli master class that eliminated Australia from the World T20, but the wheels fell off long before that. How did Australia get it so wrong? So many dubious decisions that left the cricket world scratching their heads.

It’s the format that no Australian side has ever grasped to an adequate standard and this tournament provided further proof of that. There were selection headaches over the duration of the tournament, and even when Australia faced fierce rival India in the last leg of the group stages, it felt like they still didn’t know their best 11.

The most notable absentee from the first two games was the number one ranked T20 batsmen – Finch. Australia’s plethora of talented batsmen at the top of the order edged the big hitting Victorian out of the side. Instead, they opted to play four all-rounders with Shane Watson, Glenn Maxwell, James Faulkner and Mitch Marsh.

Finch is just one of those non-negotiable inclusions. He can take the game away from the opposition in the space of two overs, with his destructive hitting only matched in the Australian side by Warner and Maxwell. You’d go so far as saying alongside Kohli, he is the best T20 batsman in the history of the format, and when you crunch the numbers, they support that argument. Finch has an average a tick under 40 operating at a strike rate of 150, and he spent the first two matches sitting in the dug out. It’s hard to fathom.

The wavering form of Marsh shouldn’t have warranted his selection in the opening pool games. Marsh’s form with the bat changes with the wind and his bowling is welcomed by the opposition with open arms.

Finch finally came into the side in the third group match against Pakistan at the expense of Marsh, but that was two matches too late.

Warner’s move down the order gathered momentum in South Africa when he was crowned man of the series batting at four.  It proved to be a false hope, with the dynamic left hander struggling on the subcontinent.

Perhaps Australia was trying to fix something that wasn’t broken, or trying to be innovative when they simply didn’t need to, and they paid the price for it.

Enough of the batsmen, lets move onto the bowlers.

You need strings to your bow to be a T20 bowler. Predictability is vulnerability. Nathan Coulter-Nile led Australia’s pace attack and his consistent gun-barrel like bowling was met with force and aggression from opposition batsmen.

Coulter-Nile took one wicket and went for an economy rate of over eight runs across four matches.

After performing impressively in the back end of the Australian summer, the evergreen John Hastings featured in just one game in the World T20.

Hastings has all the makings of a talented limited overs bowler, with his variations and his experience an asset to the side. You can mount an argument that he entered the tournament as Australia’s most inform limited overs bowler alongside James Faulkner.

The mid tournament shuffling of personnel up and down the order was symbolic of Australia’s uncertainty.

Adam Zampa was a real shining light, but even he only bowled two overs against India. He bowled six dots in his first two overs, and then went unsighted for the rest of the innings.

Australia made some precarious decisions at the selection table and the gambles put them on the back foot for the remainder of the World T20.

Not for the first time has the spotlight been placed on the selectors for all the wrong reasons, and that spotlight has never shone brighter than it has right now.