If someone offered you tickets to see Mike Tyson take on Stephen Hawking in the boxing ring, you’d have no interest in the event as a sporting contest. From a sporting perspective, it’d be a complete waste of time. Any interest would be purely morbid. 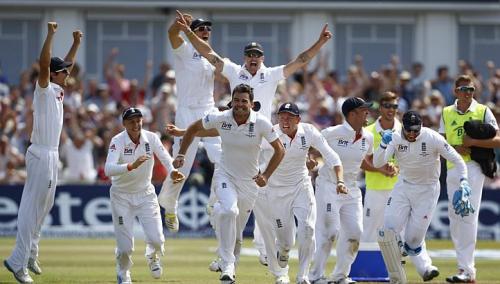 And so it is turning out to be in this Ashes series. England are so vastly superior to Australia that there is little element of competition to be witnessed. I should re-phrase, though; Australia are so vastly inferior to England.

England aren’t exactly the best side going, that title deservedly belongs to South Africa. English frailties have been exposed, then forgiven by Australian ineptitude. Young Joe Root, promoted hastily to open in place of the unfortunate Nick Compton, made a career defining 180 at Lord’s as England cruised into a 2-0 lead. He was dropped on eight as Brad Haddin sportingly waved the ball through the slips.

Jonny Bairstow, a fine player – make no mistake – benefitted from Peter Siddle’s over-stepping to make a career resuscitating 67 in the first innings. His wild slashes across the line have undone him time and again, but he was spared the cross-examination of his technique. Instead he chipped back a full toss to the bowler to bring about his end.

Stuart Broad, too, has been inconsistent. Steven Finn has been dropped. Graeme Swann has been lucky, but has bowled terrifically in periods. Matt Prior has been well out of form with the bat. Catches have gone down in the field – England aren’t at their best. The Trent Bridge Test showed that. Brainless batting first up, followed by two remarkable 10th wicket Australian partnerships.

A better side than Australia would punish them, like South Africa did last year. But this Australia side is one of the worst in international cricket. Cricket betting odds on England completing an historic 5-0 whitewash have come tumbling down. I certainly wouldn’t be encouraging any money on that outcome if I were a bookmaker.

The Australian problems are almost exclusively with the bat. The bowlers have, with the exception of Ashton Agar, performed well. Spin is still the issue. Shane Warne still is, and always will be, missed.

Shane Watson is a fine player, but he can’t convert a start and keeps wandering across his stumps. The lbw count keeps ticking. Chris Rogers has shown himself to be nothing more than an average County player. Ed Cowan has been dropped and Usman Khawaja has at least shown signs of life. Phil Hughes keeps proving me right; he just isn’t good enough. It’s as simple as that.

Captain Michael Clarke is also out of form and is too good a player to be falling into a leg side trap laid by the very part-time off-spin of Root, as he did so willingly at Lord’s. Steve Smith looks a good player and I firmly believe that he will flourish one day soon, but he has no support. Brad Haddin was brought into the side to show some fight, not drop catches and make low scores.

Agar, on bowling ability, is nowhere near ready for Test cricket. He went wicketless on a spin friendly Lord’s surface whilst Smith asked the questions with his leggies. Agar’s batting, however, has been a bright spot for Australia, as has James Pattinson’s. You don’t really get into the Australian batting until you have them six down. They’re an absolute shambles.

The ex-pros, too, have been queuing up to vent their frustration. England have been forced into fielding questions about a whitewash. It’s got out of hand; it’s gone beyond fun and got quite nasty.

I found the Lord’s Test incredibly dull. There was excitement as Australia made inroads in the first innings, but England have Ian Bell. They have Jonathan Trott. They have players who can score runs.

England also have James Anderson and Graeme Swann. Australia have Watson, Rodgers, Hughes, Smith and Haddin; this isn’t even close to being competitive. As an England fan, I really thought I’d enjoy this. I was there in 2007/07 when Australia beat England 5-0. It was humiliating and the Australians revelled in it.

I can’t bring myself to it, at the moment. Three days of the Lord’s Test were a procession. They were pointless. It’s easy to see why some were speculating that Alastair Cook didn’t enforce the follow on because someone at Lord’s had politely requested that he didn’t, in case tickets had to be refunded for Saturday and Sunday, and an awful lot of money be lost.

And that’s the point – it’s not true, but it’s entirely believable that England could be primarily focussed on financial matters, rather than cricketing.