It’s always difficult to agree on a topic such as this, but who is the best cricketer in the world right now? One man who is enjoying a stellar 2016 is Ravichandran Ashwin, the Indian all-rounder who has taken more Test wickets than anyone else and has enjoyed a solid year bolstering India’s batting. 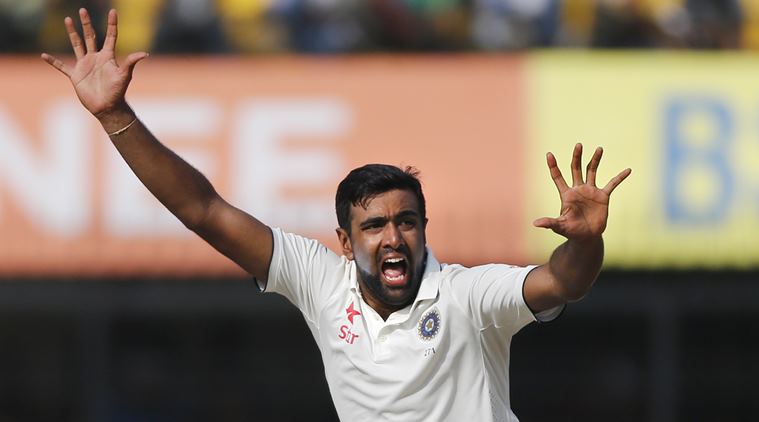 R Ashwin implores the umpires to grant him yet another wicket against New Zealand – he has 44 Test wickets to date in 2016.

There are, however, caveats. Ashwin hasn’t faced the toughest of opponents in 2016. Four Tests in the Caribbean against an ailing West Indies proved fruitful for Ashwin and he has just twirled New Zealand into the Indian dust on pitches that are tailor made for his variety and guile.

His record outside India, particularly outside the subcontinent, is weak. But, on current form, no cricketer comes close to his all-round cricketing prowess.

The other candidates, on the face of it at least, are all English. England, too, have had a Test year to date on pitches that suit them, starting in South Africa before transporting back home to face Sri Lanka and Pakistan.

To begin with, though, Ashwin’s record in 2016: he has played seven Tests and scored 306 runs at an average of 43.71 with two centuries and no not-outs. His 44 Test scalps have come at 18.86 apiece and he has recorded five five-fors and two 10-fors. In India, he is almost unplayable.

Of the available all-rounders, Moeen Ali has outscored Ashwin with 605 runs at an average of 60.50. Like Ashwin, he has two centuries but, owing to his position at seven or eight in the England batting order, he has six not outs to his name in 10 Tests.

Further counting against Ali is the old adage that a proper all-rounder has a batting average that is higher than his bowling average. Ali’s 16 wickets have come at 66.31 apiece. He has hardly answered England’s spin prayers.

Again, though, a caveat must be inserted. Whereas Ashwin has enjoyed favourable conditions, the same cannot be said for Ali. The litmus test for him will be on England’s upcoming Test tour of India where, fitness permitting, he will get five Tests to go head to head with Ashwin. I wouldn’t wager any of my hard-earned on Ali, there.

Next up is Ben Stokes. Injury has limited him to five Tests but in those he has amassed 421 runs at 61.57 with one century. Those are very healthy numbers and are bolstered by a strike rate of 110.79 runs per 100 balls faced. That’s a game changing rate.

As always, however, a caveat: these numbers include Stokes’s 258 runs from 198 balls in Cape Town at the start of the year. Boom or bust, yes, but always worth watching.

With the ball, Stokes has a respectable 14 wickets at 27.42 runs apiece, albeit without a five-for. He is, probably the most real challenger to Ashwin here, but he lacks consistency and Ashwin’s devastating ability to apply pressure and run through batting orders.

Lastly, we have Chris Woakes, drafted in for seven of England’s 10 Tests so far in 2016. He has 313 runs at an average of 34.77 with three not outs. This is higher than Ashwin, but his average is significantly lower and he hasn’t recorded three figures.

With the ball, Woakes came alive, particularly against Pakistan. This year he has 35 wickets at 20.82 with two five-fors and one 10-for. He was England’s man of the summer and has made himself an automatic selection for the Test team.

But it is Ashwin, for my money, who leads the way right now. He is the easiest and most obvious option for India captain, Virat Kohli, every time. At home, the seamers get a couple of cursory, exploratory overs at the start of the innings, then the ball is thrown to Ashwin to open up his box of tricks; offies, leggies, carom balls, arm balls, under cutters… the pressure on the batsmen is intense.

As intense as anywhere in world cricket right now.

Having seen off New Zealand 3-0, it remains possible that India can win every Test of this home season with, to come, five Tests against England, one against Bangladesh and four against Australia. Ashwin will be at the very forefront of this charge.

He’s the best cricketer in the world right now.

2 comments on “R Ashwin’s ascent – the best cricketer in the world?”