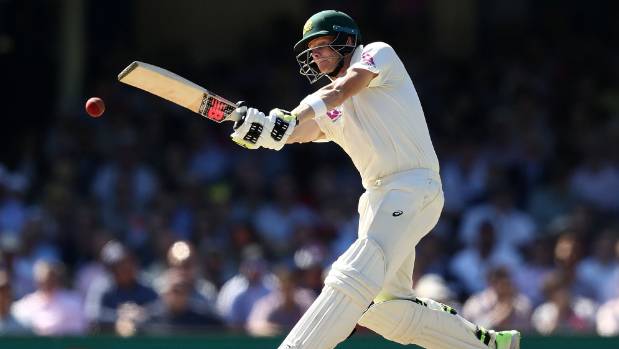 Steve Smith, playing to leg, as is his wont, has become a run machine. But there are chinks in his armour. Is Vernon Philander the man to exploit them?

Despite Smith’s incredible stats over the last few years he still doesn’t receive the universal praise that others have had heaped upon them. His crabby stance and overly dominant bottom hand make don’t make him stand out in terms of aesthetics but in terms of the consistency with which he scores Test match runs “there isn’t a better run scorer in the game” according to The Cricket Blog’s editor, Miles Reucroft.

One of the fascinating aspects of Test match cricket as opposed to any of the other formats is that every aspect of your game will be examined. Lots of players arrive at the highest level and have initial success but being able to maintain these high levels is something that only the very best are able to achieve. Part of the intrigue around Smith’s recent success is that nobody has really worked out a way to get him out.

During the coverage of the first day’s play of Australia’s series in South Africa in Durban, Michael Holding, the former West Indian great, was doing some analysis on Smith. His initial trigger movement just as the bowler delivers is to move his back leg completely across the stumps to open up his body to enable him to swing his arms freely in order to play through the leg side. If the ball is short he is already in position to play the pull or hook shoot. He is, therefore, perfectly set up to play anything on and around off stump towards the leg side.

What Holding commented on was what happens when the bowler bowls the ball around fourth or fifth stump. As every MCC handbook advises, the head needs to be still and eyes in line with where the ball is coming from. Smith does this as well as anyone when the ball is straight but once the ball is outside of the line of his eyes he is relying on incredible hand eye coordination and the reliability of the pitch not to deviate. One of the main issues levied against Smith’s ‘level of greatness’ is his ability, or lack of, to play  the moving ball and in order to be successful at that skill it is essential that the head remains over the ball at all times.

Of course the inevitable then happened and Smith couldn’t resist a nibble at a wider ball from Philander and the chance, an incredibly difficult one it must be said, went to AB de Villiers who dropped it. The disciplined bowling of the South Africans had presented them with a chance, from Smith’s most obvious weakness, and they spurned it. Usually the opposition is made to pay heavily for reprieving Smith when at the crease but that day fortune favoured Keshav Maharaj and South Africa.

What will be fascinating for the remainder of the series will be the Smith vs Philander battle which could have a huge bearing on the series result. During the recent Ashes series in Australia, Jimmy Anderson proved capable of limiting Smith’s scoring rate but didn’t ever really look like getting him out that often. With limited support, Smith was able to simply see off Anderson’s spells and then cash in against the remaining bowlers who lacked the discipline needed.

Whilst Anderson and Philander are similar bowlers, the Philander tends to get much tighter to the stumps when he bowls and as such bowls more wicket-to-wicket which makes late swing a real issue for the batsman. The line to bowl at Smith is clearly around fourth or fifth stump and try to get it moving around a little to tempt him into a loose shot. The spell Philander bowled just after lunch in Durban was exactly what is needed when bowling to Smith, but he must be given support from the other end in order to apply the pressure.

If you are to play at the highest level and remain there for any considerable length of time you have to find a method that allows you to succeed. After initially coming into the side as a young spinner and then being picked for his jovial presence in the dressing room, Smith’s performances over the last few years demonstrate a man with a tremendous appetite to succeed. As yet, there have been very few bowlers that have dominated him but in Philander, he could face his trickiest test yet.