New Zealand arrived upon English shores with their reputation at arguably the highest point in their cricketing history. England were at one of the lowest points of theirs. 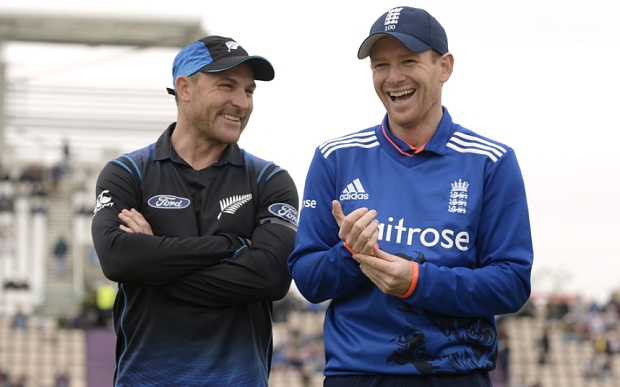 In what was originally scheduled as an Ashes hor d’oeuvre, New Zealand and England played out one of the most entertaining series on record. Two Tests yielded a 1-1 draw, five ODIs yielded a 3-2 England win and one T20 yielded a 1-0 England win. There were not stalemates; there was no staleness.

Huge credit must go to New Zealand. They carried their attacking joie de vivre and swashbuckling do-not-die-wondering cricket over from the World Cup. At every opportunity they looked to get on top of England and it nearly worked.

Except that they ran into an England side bouncing back from somewhere near rock bottom. The amazement garnered by their ODI antics, where England routinely racked up big scores and passed 400 for the first time in their history, has somewhat papered over the cracks that still exist in the Test side. For the first time, there is a real sense that England’s Test and ODI sides are two different entities.

England under Alastair Cook are an entirely different proposition to England under Eoin Morgan, as New Zealand discovered. I’m getting tired of saying this now, but Cook is a poor captain. He’s the best opener I’ve seen England have and is a world class player, but he is a million miles away from being a world class captain.

If there is one thing that England’s battle with New Zealand has highlighted, it is that it is more important to have a popular England than a successful England right now. No one would have been too bothered had England lost the ODI series 3-2, rather than win it. The foundations have been laid for a bright future. Everyone loves Joe Root. He would be a popular face of English Test cricket.

The Tests against New Zealand did at least show England are moving in the right direction, with key performances from young players and the emergence of Mark Wood as a seam bowler. A series against Australia, with all their spite and venom, will be an entirely different kettle of fish, though.

The Kiwis will be sorely missed by many in England. Brendon McCullum deserves enormous praise for the work that he has done with Mike Hesson in fostering a team that plays for one another, enjoys one another and plays the game in such a wonderful spirit. Not for them the incessant sledging and in-your-face attitude of their antipodean neighbours.

McCullum is a man who handled himself with dignity throughout – he was always the first to praise England and admit when New Zeleand had come up short. Such is their philosophy that there is almost an acceptance that they will, at points, fail.

England can learn a great deal from New Zealand. Ross Taylor was ousted as captain upon Hesson’s arrival as coach and McCullum usurped him. It was seen as something of a coup and the atmosphere around New Zealand cricket was strained. To their credit, McCullum and Hesson have managed to keep Taylor on board as a central figure in their side and they have gone from strength to strength.

England, with a new coach arriving, should surely seek a way to replace Cook as Test captain, whilst keeping him as an integral member of the squad.

They can also learn a lot from the Kiwi attitude. Defeats will happen, but so will glory if you lay the foundations and build upon them.

I cannot possibly overstate how impressed I have been with New Zealand over the past 12 months and this series was a delight. Whilst England prepare for the Aussies, the immediate future for New Zealand is a little quieter.

The have an as yet unconfirmed ODI assignment in Zimbabwe before taking on South Africa in the same format. Lamentably there are no Test scheduled. They then face the Australians in a Test series in November.

I am sure I am not the only Englishman wishing them nothing but the best.