Bangladesh find themselves in Pool A, which appears from the outset to limit their chances of progression. England, Australia, Sri Lanka and New Zealand must be overcome, not to mention Afghanistan and Scotland. They might fancy nicking a win against England, but Pool B would have offered a much better chance of progression. 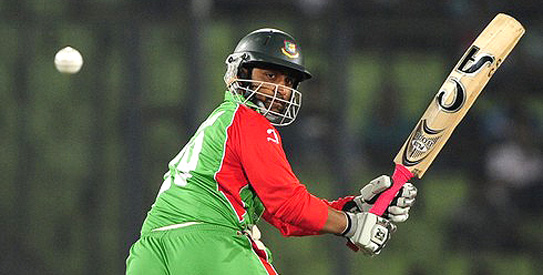 Tamim Iqbal can fire Bangladesh to the knock out stages

To pull off a heist, therefore, Bangladesh will be relying on some stellar performances from their star players. We are long time admirers of Shakib Al Hasan at The Cricket Blog, but we have picked out Tamim Iqbal as our one to watch from this squad.

The explosive opener has now played in 135 ODIs (to date) and has 3971 runs at an average of 29.85. Given that it seems like a lifetime ago that he smashed England around Lord’s in 2010, becoming the first Bangladeshi to have his name etched onto the honours board at the exalted venue, it is something of a surprise to be reminded that Iqbal is still on 25. He turns 26 during the World Cup, but whether or not Bangladesh are still in it by then, will be hugely impacted by the left-handed opener.

It feels as though Iqbal’s career has gone sideways somewhat, so what a platform upon which to remind the world of his once obvious talent.