So here it is; Cricket World Cup number 11. It promises to be a slow burner, taking a month to build up to the crescendo of the knockout stages, as two pools of seven teams each are whittled down to eight quarter finalists across the cricket grounds of Australia and New Zealand.

It doesn’t take a huge leap of faith to predict the four to go through here. England, Australia, Sri Lanka and New Zealand should have enough to progress. Bangladesh are hampered by the seamer friendly conditions, their spinners will be less effective than they were four years ago in more familiar conditions.

Again, it is hard to look beyond the obvious – South Africa, India, Pakistan and West Indies. This group, however, carries far more intrigue in that Zimbabwe have been performing well in the warm-ups and West Indies look a complete shambles.

England look the most vulnerable of the big wigs in Group A. Afghanistan have enjoyed monumental success in recent years, rising from nothing to competing at the top table in next to no time. Their care-free style could well catch England unawares. Then, England could take a win off one of Australia, Sri Lanka or New Zealand and you wouldn’t back Afghanistan to consistently pose serious questions of the big boys. Bangladesh will be searching for any opening they can find.

In Group B, it should be a walk in the park for South Africa. Pakistan are Pakistan, although England are looking to compete with them in the ‘who knows what will happen?’ stakes. India have been in Australia for months now and haven’t won a game. There is turmoil behind the scenes and this World Cup could prove to be the calm before an almighty match fixing storm. Ireland and Zimbabwe will ask serious questions of everyone but South Africa. For fans of an upset, this is the group to monitor closely.

We’ll start from leftfield: Umar Akmal. He has always flattered to deceive to a certain extent, but in an unpredictable side, with an unpredictable player, it is tempting to see the runs. He has found a bit of form leading in to the tournament and could make waves at the tournament proper. Virat Kohli looks like a one man band at the moment. He is in superb form and won’t shy away from the challenge of dragging India up by the boot straps. He well and truly has the measure of the conditions here, too. As does Steve Smith. Everything he has touched has turned to gold of late and there appears no reason for that form to end now.

This section is a little easier to call owing to the fact that spin does not appear set to play a major role at the tournament, see Australia’s preference to opt for Xavier Doherty in their squad over Nathan Lyon. Spin will be used to dry up the runs – not take wickets. For that, it’s over to the quicks. And none is quicker than Mitchell Johnson. Or Dale Steyn. Lasith Malinga is never an easy proposition, either, and he will be the spearhead for Sri Lanka’s challenge. Tim Southee should feature prominently for New Zealand, too. 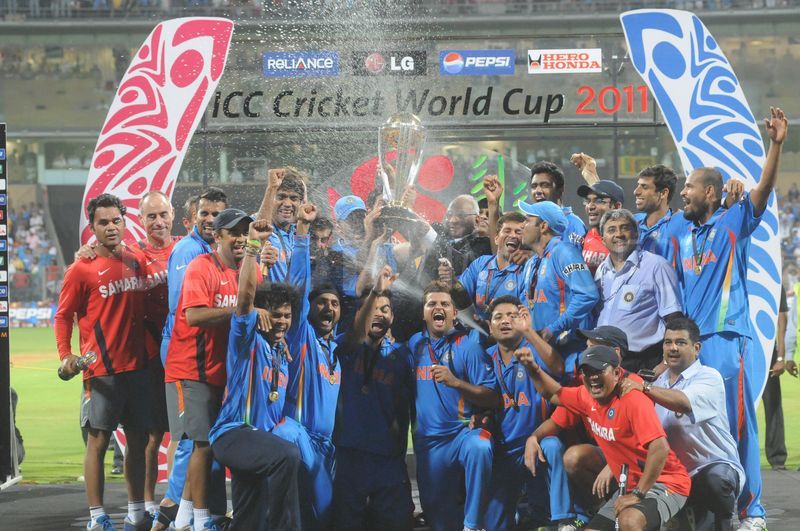 We don’t envisage a repeat of these scenes in 2015

It is imperative not to hit top form too early. Given the length of the tournament and the number of games involved, it is hard to envisage an unbeaten run through the tournament. A cautious start, a quick sprint at the end of the group stage then a three game spike to result in overall glory. Beware the slow starters. Rule out those who sprint out of the blocks.

We’ll start by ruling a few sides out, assuming that the top eight make it through the groups. Even if they don’t, we can rule Zimbabwe/Bangladesh/Ireland/Afghanistan out at this juncture. None of them is going to win the tournament.

England will struggle for consistency, although if they are to do anything, they look set for a slow burning sort of start. The batting order looks decided, but there is room for a re-jig in the bowling department. To Tredwell or not to Tredwell? Either way, they simply are not as good as South Africa or Australia. And they will have to beat one of them to win.

India’s defence of their World crown looks destined for failure. The batting has underperformed of late, bar Kohli and Ajinkya Rahane, and the bowling has been opened recently by Stuart Binny. Yes, that Stuart Binny. They will simply concede too many runs for Kohli to chase down.

Pakistan are sans Junaid Khan, which is a huge blow. And possibly Saeed Ajmal. The top order of the batting looks too brittle and will get blown away too many times to mount a serious challenge. We’ll strike West Indies off right now, too. They’ve got no chance, they’re in disarray and there will be no Phoenix from these flames, self-doused in high-octane petrol as they are.

Next up are Sri Lanka. It’s a swansong for Mahela Jayawardene and Kumar Sangakkara, with the other golden oldie, Tillakaratne Dilshan also expected to prop up the batting. Too much will also be required of Malinga and Nuwan Kulasekara. The resources will be spread too thin, although if you are looking for a challenge from the subcontinent, this is it.

I think New Zealand have been over-hyped. You can see why. This is a good side, but it is lacking in key areas. Whilst Southee and Trent Boult are fine Test bowlers, evidence suggests that they are not as effective with the white balls. Brendon McCullum, Ross Taylor and Kane Williamson are fine batsmen, but would you back Luke Ronchi to maintain his recent white-hot form? He’ll need to if New Zealand are going to challenge. Likewise, Martin Guptill will need to blaze a trail from the front. I just feel that the bowling might be a bit limp to win the whole thing, though. There is no paceman to be feared by everyone. There is no Johnson, Steyn or Malinga. That will be New Zealands’s undoing.

So that leaves us with Australia and South Africa. Australia don’t have a proper spinner, but they have Johnson and Mitchell Starc and Pat Cummins. They have Dave Warner and Aaron Finch and Smith and Haddin and Maxwell and Faulkner. The side oozes class in every department. But they don’t have a spinner…

South Africa have Steyn and Morne Morkel and Vernon Philander. They have Quinton de Kock and Hashim Amla and AB de Villiers and JP Duminy and Faf du Plessis. They also have Imran Tahir. A canny leg spinner is always useful to have around. Make no mistake; this is the strongest side, on paper at least, at the whole tournament. But South Africa have never won a knock-out game at a World Cup. History is against them. But that XI…

Think we’re talking cobblers?! Agree with us? Get involved!

We’re running a predictions competition throughout the tournament with our friends over at SuperBru. Why not join The Cricket Blog’s pool and link up with the 50,000 others who are involved.

We’ll be sharing our picks throughout the tournament, so get involved and see how you fare against your fellow cricket aficionados!