You’d think that there would be near total unanimity amongst England fans towards one of their rising stars, Jos Buttler. He’s an aggressive batsman who looks in tune with the demands of modern cricket, yet his wicket keeping is at times sloppy and remains a work in progress. He showed both comments to be true during England’s recent ODI series win over New Zealand.

He blazed an ultra-aggressive century in the first fixture; a Man of the Match 126 that propelled England towards their first ever 400+ score. In the fourth, he put down a relatively straightforward chance diving to his left off Brendon McCullum.

That followed on from a howler of a missed stumping in the final Test of England’s Caribbean tour, when Jermaine Blackwood, on four, charged out to attempt to slog Joe Root, only to charge past the delivery. He was in no man’s land as the ball ricocheted off Buttler’s gloves for a bye. Blackwood went on to score 47* in a match winning partnership with Darren Bravo. It was a pivotal moment.

I felt keenly sorry for Buttler. He is a terrific batsman with an attacking élan that has been missing from England’s game in the past 18 months or so. He doesn’t bat with fear, rather optimism. If you were drafting a World ODI XI, his name warrants, at the very least, serious consideration.

Yet England have been a bit hasty with him in Test cricket. In the weeks before his Test debut at Southampton against India last summer, England captain Alastair Cook declared that he was not ready for Test cricket. As regards his keeping, that is still true.

His batting, too, has been hampered by a selection policy that saw him bat as low as eight in the Caribbean. That, plainly, is ridiculous. If he is to play in the Test XI, you have to play to his strongest suit; his batting. His return of 474 runs in eight Tests at an average of 52.66 represents the highest average of any player in history with over 400 runs, yet to register a century.

And he won’t get too many opportunities batting at eight.

Whilst he is a leading light of the ODI revolution currently sweeping through the England side, his keeping, if that is to be his long term role, would have been better served with some practice keeping for his County, Lancashire. That, after all, was the sole reason for him leaving his home County, Somerset.

Craig Kieswetter was the preferred gloveman of the Cider Boys. Buttler was forced to move north to get exposure to keeping in four day cricket. He was swiftly making his Test debut before he’d even sized up his gloves at Lancashire. Instead he has been left to learn his trade on the most demanding platform of them all: Test cricket.

That scarcely seems fair. Given that England have 17 Tests this year, could they not have selected a short-term specialist? Someone like James Foster? He could bat at eight and he wouldn’t have missed the stumping of Blackwood.

That would have given Buttler time to play red ball cricket for Lancashire and focus on batting at his brilliant best in England’s ODI side. 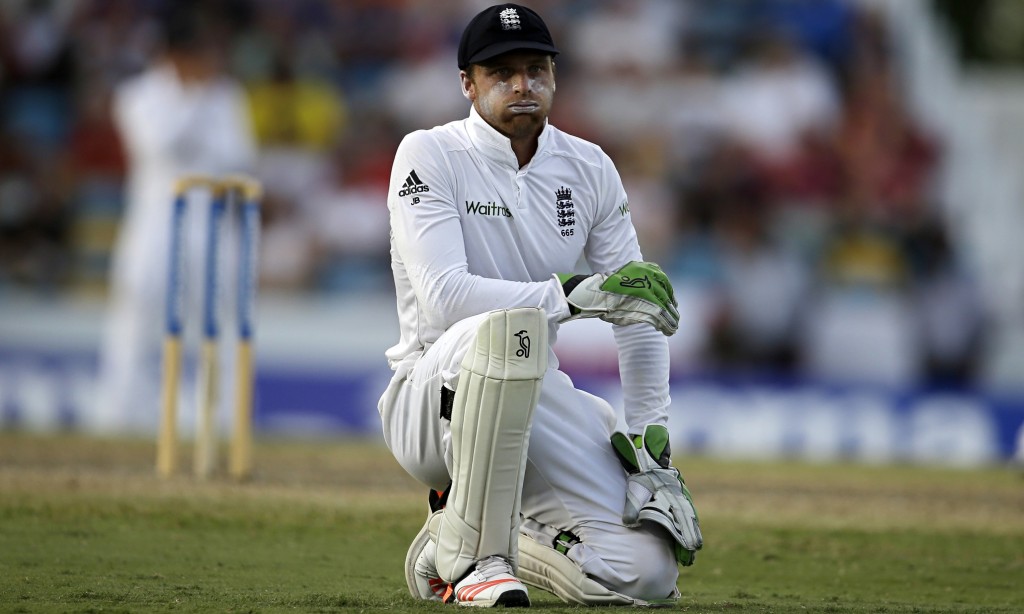 Buttler’s keeping is far from the finished product. It seems unfair that he should be learning his trade in Test cricket and batting down the order

Is Buttler going to be England’s long term ODI keeper, though? He merits inclusion on his batting alone. Sam Billings has been brought into the side and is a competent keeper as well. Jonny Bairstow, England’s hero in the New Zealand decider, was drafted in to replace Buttler and is the better keeper.

This wouldn’t be a bad direction for England, and Buttler, to move in. The likes of McCullum and Kumar Sangakkara only batted to their full potential upon surrendering the gloves. To allow Buttler to fully focus on his batting would be beneficial in the long term, even if it could result in his omission from the Test team in the short term. What sort of batsman could he become with full exposure to the Big Bash and IPL, though?

To answer the question at the top, England have overhyped Buttler’s keeping. In doing so, they have under-hyped his batting. There is plenty of room for an England ODI XI with both Bairstow and Buttler in it. There is little point in an England Test XI with Buttler batting at eight.