The rise of T20 franchise leagues, from Canada to mainland Europe, a T10 league in the Middle East and now The Hundred, are all vying for a slice of public attention and, therefore, money. Each needs to stand out from the other. Each wants to be like the IPL; each wants to be like football. For many years now, cricket has slowly slipped from the public consciousness in the UK, seemingly sacrificed by those meant to protect it at the altar of Sky’s broadcasting rights package which has so enriched the England & Wales Cricket Board (ECB). The ECB’s response? The Hundred. 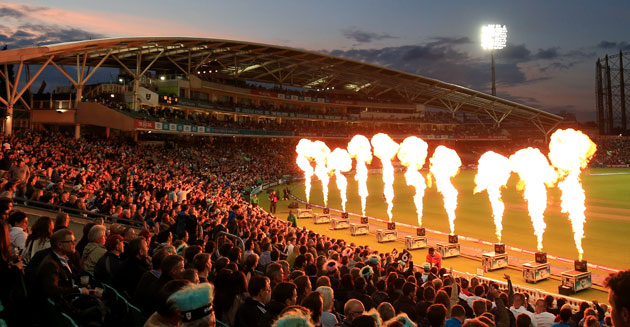 Another empty house for the T20 Blast at the Oval… does cricket really need to extend it’s popularity? It could do so with the tools it already has

If you’re passing by this website, chances are you’ve heard of The Hundred. It’s shorter than T20, by 20 balls per innings, and is aimed at attracting a new audience to the sport of cricket. One of the fundamental aspects of this popularity drive is that some of the tournament will be shown by the terrestrial broadcaster, BBC. Obviously, the whole country is going to tune in and cricket will be back where it was at the denouement of that magical summer of 2005, when a nation was gripped by the myriad twists and turns of The Greatest Series Ever Played, when England regained the Ashes from Australia after a generation Down Under.

Never mind the complete lack of context, the blurring of county lines, the needless addition of yet another format to the English summer and the dearth of international stars that will be on show (AB de Villiers has shown a bit of leg, but he’d turn up for the opening of an envelope if the price was right) – people will absolutely, definitely, love The Hundred. The ECB’s marketing department has told us so.

The ECB, which has done a lot to put people off cricket, with extortionate ticket prices and a lack of accessibility for the public, not to mention its own treatment of star players, internal appointments and PR gaffs with Ponzi Scheme-running billionaires, is absolutely certain that The Hundred will rejuvenate the sport in the UK. True to ECB form, there is only one motive behind this: money.

It tried to compete with the IPL by publicly undressing for Allen Stanford and agreeing to the lamentable Stanford T20 for 20. It committed the entire sport to pay TV. It got embroiled in public spats it could not win and employed Paul Downton. It has shunted County Cricket to the fringes as it chases more money and is further damaging this cornerstone of the sport with The Hundred.

All in the name of money. Popularity is merely a code word for cash at the ECB.

As a cricket supporter though, and as one who only got into the sport as a result of its coverage on Channel 4 (my father’s a Yorkshireman so Sky TV wasn’t on the menu when I was a kid), should I be bothered about cricket’s popularity?

It’s an interesting question. My gut reaction is to say yes, yes I should be concerned by that. But explaining why is somewhat challenging. Who does the increased popularity serve? It doesn’t really assist me in any way. I love cricket and, to be blunt, I don’t really care if not that many other people do.

Cricket doesn’t exist to be popular. It exists to entertain those who enjoy it. That’s why you still see decent crowds at County cricket games, not least in the T20 Blast. That competition is popular, even if only with hard drinking weekend warriors, as is the perception. Whatever their motives, they’re still turning up and paying their money. You can get into a pub for free (usually) and the beer is better, the seats more comfortable and you can drink from an actual glass. The cricket, for whatever reason, is a crowd puller. Maybe it’s the actual cricket that they’re coming to watch.

So, the ECB has a ready made, popular tournament in its stable. Why not just make that free to air on TV? Hundreds of thousands are paying to go to games up and down the country, why not extend the invitation to every household in the country by getting a terrestrial broadcaster to televise a couple of games each week, plus finals day?

This is where the ECB’s motives are betrayed. They’ve already signed the T20 Blast over to Sky. It’s a done deal and the money is in the account. So, they needed to create something new to sell. It’s aimed at mums and kids, apparently, not traditional cricket fans. It’s all about attracting a new audience.

How will this new audience be reached? I’ve had a few adverts for The Hundred appear on my Facebook feed, but the interaction is, at best, minimal. I can’t envisage my wife suddenly turning round and being desperate to go. She sat through a day of Alastair Cook and Jonathan Trott batting against Sri Lanka at Cardiff in 2012 and I think, sadly, that that was that.

And that’s kind of the point. I thoroughly enjoyed a day of Cook and Trott, although the prospect of seeing a bit of KP later in the day was a tantalising one, but I’m a cricket fan. She’s not.

Being a cricket fan, certainly in England, seemingly means that you have to exist in a state of constant fear about the wellbeing of the sport. No one’s watching! The standard is rubbish! Test cricket is dying! No one’s watching!

It has always been this way. Cricket is not dying and people, contrary to popular belief, are watching. Granted, not as many as were watching in 2005. I’m sure a lot of the viewers from that summer would welcome the opportunity to watch live cricket again, but can’t afford or justify the expense of Sky.

If the ECB is serious about the popularity of the sport – which it definitively is not – then the damage done to viewing figures is not irreversible. The T20 Blast could be made available to terrestrial broadcasters. England’s T20 fixtures could, too. And some of the ODIs. How about the odd Test?

Whatever happens, The Hundred will be portrayed as a success simply because it will attract larger TV audiences than any England game has since September 2005, with the notable exception of the 2019 World Cup final which was, in a rare moment of sensibility, broadcast free to a nation. Will that moment of international glory be enough to draw eyes to The Hundred? It will be run through the ECB marketing machine and rammed down our throats. The IPL, when that was on terrestrial, used to attract decent audiences as well. Even that has now been hoovered up by Sky.

The ECB had the tools available to extend cricket’s reach. Sadly, it has chosen to ignore these and concoct a new tournament which simply has to succeed, even at the expense of everything else. The only winner, once again, is the ECB’s bank balance and those of its well remunerated executives (give yourself another pay rise, Mr. Harrison!). The answer was right in front of them, but as if to justify their own existences and plump up their egos, they’ve provided an answer to a question literally no one was asking. All in the name of popu… sorry, money.

4 comments on “Does cricket need to be popular? The ECB and The Hundred”