Whilst the eyes of the cricketing world begin to focus on the magnificent year of cricket ahead, one team is slowly putting itself in a position of real promise. With the World Cup less than a month away, New Zealand are gathering momentum and, more pertinently, coming into some wonderful form ahead of the competition. Their form throughout 2014 was superb and was arguably the most impressive of any of the familiar nations. 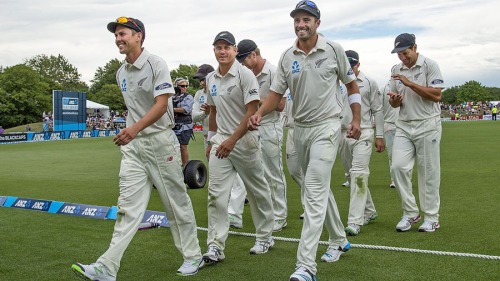 Trent Boult, left, and Tim Southee lead New Zealand off the field after dismissing Sri Lanka for just 138 in Christchurch. The pair have been instrumental in New Zealand’s rise.

In the last year they have recorded Test victories over India and the West Indies- twice. They also earned a very credible draw in the UAE against Pakistan who had beaten Australia very comfortably only a few weeks prior to the Black Caps arriving in Abu Dhabi.

Lying seventh in the Test rankings and sixth in the One Day table suggests a side that shouldn’t have serious aspirations. However, despite the serious obstacles to come, there is a real feeling of optimism around the current squad and the ability they are consistently showing means they will be tough opposition for whoever they face.

New Zealand have a good history with their Test captains and in Brendan McCullum they have the best in world cricket at this moment. Leaving aside his brilliant efforts with the bat recently (his 195 against Sri Lanka was an onslaught the likes of which has not been seen in Test cricket for many years) it is his decision making that separates him from the rest.

Much of captaincy relies on having an intuition for a situation as it unfolds. McCullum is very brave with his decisions and generally attack minded, which has certainly seen a change of approach in his team’s style.

Of course a good captain can only do so much but, fortunately, New Zealand currently has a squad brimming with potential. Much of cricket is about building pressure and in order to do that it is imperative that the batsmen in the side are contributing. In Kane Williamson the Black Caps appear to have unearthed a talent that has been breaking national records and last week surpassed Martin Crowe in becoming the fastest player from his country to score 3000 Test runs.

His dutiful attention to his batting has enabled his team mates to also flourish alongside him and play their natural games. In the recent Test against Sri Lanka at the Basin Reserve, the partnership between Williamson and BJ Watling almost guaranteed victory. It was not flamboyant at the beginning and demonstrated that this side can do the hard yards as well as score quick runs.

However, what was really noticeable about New Zealand’s form in 2014 was that they were almost constantly taking 20 wickets in a game. The emergence of Tim Southee over the last few seasons has been vital and his development has been a huge plus for the side. If you have a bowler who you can rely on to keep it tight and build pressure, the fielding side can usually reap the rewards.

Alongside his opening partner, Trent Boult, they have been able to consistently take wickets and with decent targets to defend have been successful against some of the best batsmen around. The advantage of having a left hander and a right hander at the top of the batting order has always been considered an advantage due to field placements having to constantly adjust, and having that as a bowling attack provides the same benefits – the batsmen are always facing different lines of attack. It is much harder to adjust early in a batsman’s innings if they are constantly having to alter their stance and thinking process.

Despite having only mentioned a few of the key performers in recent months, the remainder of the side again offers variety and quality. The drawn series in Pakistan typified this fact with a wonderful team performance in managing to square the series. In tough conditions they knuckled down to the task and clearly learned from their errors in the opening game.

Having home advantage for part of the World Cup will certainly make New Zealand a team to fear in the tournament. Success in the Test format appears to have breathed new life into the entire squad and they are brimming with confidence. With players who can turn games single handedly, they will prove very tough to beat.

Following the World Cup, the Black Caps will travel to England for a two Test series. Headingley and Lord’s are the venues for the games and with both venues favouring Boult and Southee, New Zealand will feel they have a good chance. In 2013 they ran England very close and with some more experience and quality in the side they will be confident of success.

After a record breaking 2014, New Zealand cricket is on an upward trajectory and the future looks bright – here’s to hoping that it is, for cricket needs a plucky underdog at the top table following the decline of the West Indies and the constant state of flux in which Pakistan finds itself.