The England team that toured Pakistan in 2005 was on a roll having won five consecutive Test series against top opposition, both home and away (including the tough Ashes win in 2005). So confident was the England team that Paul Collingwood (a veteran of only two Tests at that time) thought of himself as Glen McGrath and predicted a 3-0 whitewash for the visitors. 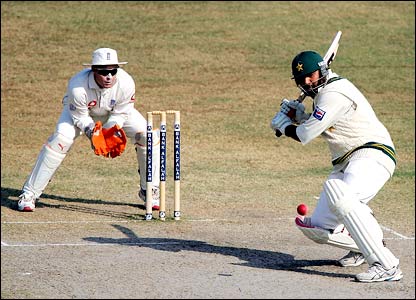 Inzamam-ul-Haq was one of England's chief destroyers on their last tour to Pakistan in 2005.

Once the action started in the middle, however, both Collingwood and England narrowly escaped the embarrassment of a whitewash themselves. Apart from four days in Multan, they looked like wining nothing on that tour.

Things are very different this time around, though. To start with, the series is being played in the United Arab Emirates. No matter how much the conditions mimic Pakistan it will be a series away from home for the ‘hosts’.

The 2005 result was also due to titanic efforts from Inzamam-ul-Haq and Shoaib Akhtar. The current Pakistan side lacks players of the same calibre.

The current England side is a lot more respectful of its oppositions and it seems they have learned the lessons of 2005 by not getting carried away after another Ashes win. The English players are preparing in South Africa and India prior to the series and with Andy flower and Andrew Strauss, posses a great leadership partnership that has served them tremendously well of late.

A lot is being said about the slow pitches in the UAE, but England, unlike the team that toured Pakistan in 2005 where Ashley Giles and Shaun Udal were the leading spinners, have got a quality operator in Graeme Swann.

He will trouble most Pakistani batsman, especially with their poor record against quality spinners in recent times.

And last but not least, England have a very powerful and long batting order and it will be a big challenge for Pakistan to take 20 wickets on batsman friendly pitches.

Logic suggests that this will be a far different proposition to the one Inzamam’s side faced in 2005. However, that’s the beauty of Pakistan cricket. Despite losing two match winning bowlers (Mohammads Amir and Asif are spending time at Her Majesty’s pleasure) they have found a combination that can take 20 wickets even on docile pitches, and I won’t be surprised if the end result is a 1-0 series win for Pakistan.

To prove me correct, not only will Pakistan need to bat and bowl exceptionally well, but take all their chances in the field, too!