Australia struggling against spin in the subcontinent… sounds familiar, doesn’t it? 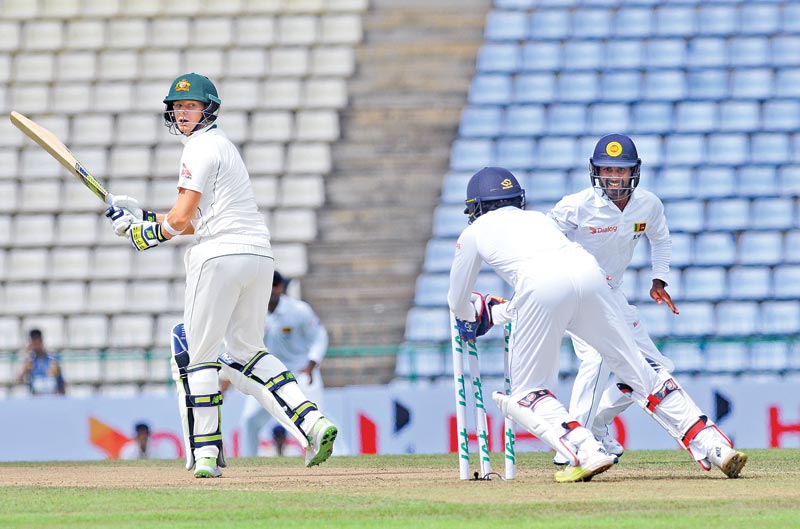 Australia captain Steve Smith looks back in anguish as he loses his wicket to spin in Pallekele during Australia’s 106 run defeat in the first Test against Sri Lanka. He wasn’t the only Australian who struggled against spin bowling, and not for the first time in recent times, either

A brilliant maiden Test hundred from Kusal Mendis gave Sri Lanka an historic win over Australia in the first Test at Pallekele, with the tourists again proving their ineptitude against spin in the subcontinent.

Australia failed to capitalise on their early dominance after dismissing Sri Lanka for a mere 117 on the opening day.

The tourists started day two just 51 runs behind, but the immediate departures of Steve Smith and Usman Khawaja were the catalyst for a stunning collapse.

Smith would be embarrassed to see a replay of his shot. Dancing down the pitch to just the second ball of the day. He was trying to set a positive tone, but it had the opposite effect.

Sri Lankan spin duo Herath and debutant Lakshan Sandakan, took 16 of a possible 20 wickets, further exposing how fragile this Australian side is against spin bowling.

Australia, like the captain, is the number one ranked Test side, but Sri Lanka shined a bright light onto their brittle batting lineup in Kandy.

Joe Burns and Usman Khawaja both failed in the first Test and must find more consistency if they are to lock down their positions.

Journeyman Adam Voges, who turns 37 next month, also needs runs to solidify his spot in the middle order. After a poor Ashes series last year, Voges was superb against New Zealand and the West Indies last summer. His age does make him vulnerable, so runs are always a necessity for the West Australian.

It’s hard to gauge just what effect this loss will have on the Australian side. It certainly can’t be swept under the carpet. Sri Lanka resurrected some demons that Australia thought they had overcome.

Australia face the daunting prospect of travelling to India for a four Test series early next year – their first visit since the infamous homework-gate debacle under Mickey Arthur.

The crushing 106 run loss here in Kandy has made Australian fans far more anxious about the looming tour of India.

Ravi Ashwin and Ravi Jadeja bowling on a dust bowl: It will be twice as ugly as the Kandy Test.

So what needs to happen? No one looked comfortable facing spin in Kandy. Too often did batsmen fall due to poor shot selection. Wickets were gifted.

Now it’s over to Galle, where Australia must respond. The ramifications will be dire if they don’t.