Every now and then we are fortunate enough to witness something noteworthy in the footnotes of our game. The number of outstanding catches that T20 has spawned, for example. The batting form of Steve Smith in the Test arena. The batting of Virat Kohli in white ball cricket. 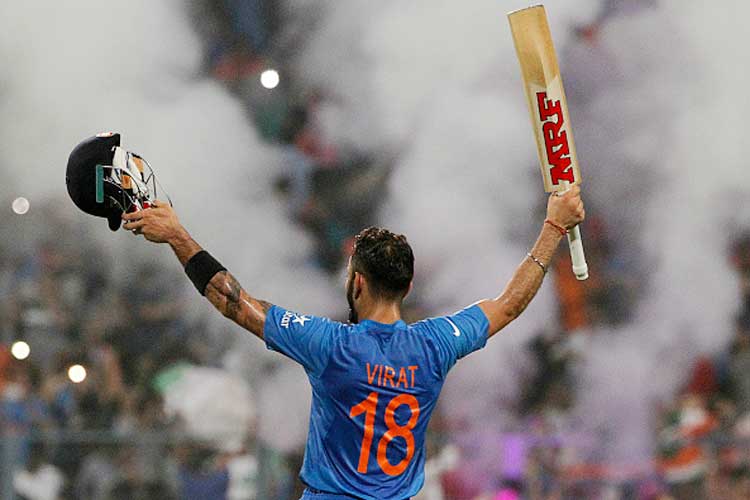 Is Virat Kohli the greatest ODI batsman of all time? It’s hard to argue against him

Kohli, perhaps, is the most fortunately positioned from a historical perspective. In stating that he’s the greatest ODI batsman of all time, there is no scope for complete dismissal of the statement. Were you to say, however, that Smith is the greatest Test batsman of all time, you could reasonably be laughed out of town. Don Bradman has that title on lock down, seemingly for all eternity.

ODI cricket is a much younger sport. That’s not to say that it hasn’t had some damn fine batsmen down the years, though; Sachin Tendulkar, Kumar Sangakkara, Brian Lara, Adam Gilchrist, Michael Bevan, Sir Viv Richards… you get the picture.

Yet Kohli trumps them all. His average of 57.32* is the second highest the format has ever known and he’s played 207 games, enough to take in all grounds, conditions and competitions. Only Ryan ten Doeschate (average 67.00) betters Kholi, but he’s been playing associate cricket for the Netherlands and has only played 33 ODIs.

Kohli is the 16th highest run scorer in ODIs. Tendulkar’s tally of 18,426 remains a way off, but Kohli averages 12.5 more runs per innings than his illustrious compatriot and former team mate. Only Tendulkar has more centuries than Kohli, too. Sachin racked up a monumental 49 ODI tons, including the format’s first ever double century.

Kohli has 34 ODI centuries. That’s one every six innings. Tendulkar registered one every 9.5 innings. It’s clear that Kohli is carving out a historical path to greatness for himself. It seemed, upon his retirement, that no one would match Tendulkar’s run scoring feats in the game, but Kohli will run him close. He’s still only 29 and looks like he has a lot more mileage in the tank. At his current rate, he will reach 49 ODI centuries in another 90 games. Given how frequently India play the format, he could get there in around five years’ time – that even allows for the odd break from the game.

A more granular examination of Kohli’s feats reveal even more impressive aspects to his game. Of his 34 ODI centuries, 20 have come when chasing. To add some context to that, that’s more centuries when chasing than Mahela Jayawardene, Jacques Kallis, Brian Lara and Adam Gilchrist achieved in the entirety of their careers.

Since Kohli became captain of India, the numbers have only become more impressive. He has led out his country on 48 occasions now. He has a scarcely believable average of 80.55 with 12 centuries in that time. That’s one century every four innings. His strike rate also escalates from a career figure of 91.75 to 98.10.

Of course, the strike rate can be explained by the current rules which permit fewer fielders outside of the 30-yard ring, but this demonstrates an adaptability to Kohli’s game. For example, the same rule changes resulted in the demise of Alastair Cook’s ODI career.

Where will Kohli’s career end up? It seems, at this stage at least, that he would be unlikely to play for as long as Tendulkar did. Tendulkar played 463 ODIs in a career as remarkable for its longevity as it was for its run scoring records. Kohli is playing a vast amount of cricket, captaining India in three formats and being the star attraction for the Royal Challengers Bangalore in the Indian Premier League.

There also hasn’t been a noticeable loss of form in Kohli’s game. He has a terrible Test record in England and was conspicuous by his silence with the bat during Australia’s tour of India last year. These have merely represented minor blips, however, and have come in Test cricket, not ODIs.

Like Tendulkar did, Kolhi will surely endure a loss of form at some point. How will he cope with it? Will it encourage thoughts of retirement? He will be well aware, having witnessed it first hand, that Tendulkar played on a little bit longer than he should have in pursuit of that 100th international hundred. Will he want to avoid the same mistake?

There have been voices of discontent around Kohli’s Test captaincy, too. India outside the subcontinent have never been the most fearsome proposition and the signs are that Kohli won’t be the man to address that. The recent series loss in South Africa featured a string of bizarre selections, apparently driven by the all-powerful man himself, although it did contain a consolation Test victory in Johannesburg. Kohli was keen to paint that as one of India’s finest ever overseas victories.

This is a big year for India in Test cricket, with visits to England and Australia ahead. Test supremacy remains elusive for India and Kohli, although this is the year that could finally change if they can muster those big away series wins.

For the Test trials they face, however, there is no doubting India’s white ball standing nor Kohli’s. He is, quite comfortably, the best ODI batsman in the business and the best the format has ever seen.

It is important to recognise greatness when it is front of you, rather than in hindsight. There is still a lot more for Kohli to achieve, but his standing is surely cemented in place now. A top order batsman of style, class, substance and vast quantities of runs, we are witnessing the greatest of all time right now.

* All stats and figures in this article are correct as of 15 February 2018.

8 comments on “Virat Kohli the best ODI batsman ever”